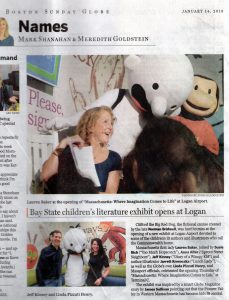 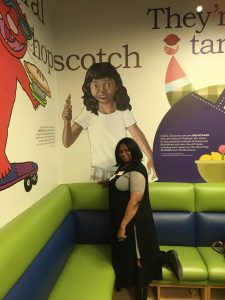 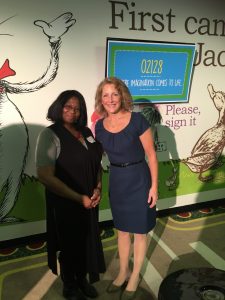 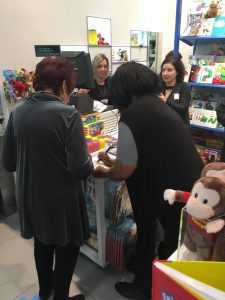 From The Gloucester Times:

Susie’s Stories is all about children’s literature

ROCKPORT — Despite its small size, Susie’s Stories, a children’s bookstore that opened this summer on Bearskin Neck, has a lot to offer for young readers on Cape Ann.

Located at 51 Bearskin Neck, the small, blue-and-white cottage has its walls lined with classics like “Chicka Chicka Boom Boom” and “Blueberries for Sal,” as well as new works from small-publisher authors.

The store was opened this summer by children’s author and Framingham resident Susie Rich. She said she became enamored with Rockport after her first visit accompanying her husband, Doug, on a business meeting.

“We loved the place,” she said. “I’d never been to Rockport before. It’s so adorable and cute. There’s so many interesting things about it.”

The couple enjoyed their stay so much they went back again earlier this year. That’s when Susie Rich saw the Bearskin Neck property was available to rent. Susie’s Stories opened a couple of months later in June. Daughter Jensine, who studied education in college, helped with the store’s selection of books.

Both Doug and Susie said the locals around Bearskin Neck have welcomed their business with open arms.

“We’ve met so many nice people,” Susie Rich said, including “a lot of teachers and librarians. The other store owners have also been very nice. It’s been a very positive and enlightening experience.”

Susie Rich has built her career in social work and homelessness prevention. Currently, she’s employed in the renter assistance division of South Middlesex Opportunity Council in Framingham. Writing has been a hobby of hers since she was a teenager. Her books are inspired by social work, climate change awareness and her family.

“While (my children) were doing dance lessons and sports practice, when I had an hour or two watching them, I would write,” she said.

Her first published children’s book, “Too Much Hopscotch,” was released in 2013. Five years later, Logan Airport chose the main character of the book, Becky, to be featured in a series of murals highlighting children’s literature at the A, B and C terminals.

From there, she wrote four more children’s books. “How My Daddy Taught Me to Dance” was inspired by her bass-playing husband and dancer daughter, who grew up to be a cheerleader for the New England Patriots. “D.U.A.N.E.” is a superhero comic book about climate change. It follows its titular hero, based on the Richs’ son, Duane, as he fights against extreme weather events.

Now, Susie Rich said, she’s working on her first novel for mature readers, based on her work with homelessness prevention.

“I couldn’t do this without my husband,” she said. “We moved here from Cincinnati in 1989 for him to go to Berklee. I was supporting him then, now he’s supporting me doing this. I can’t thank him enough for being there for me.”

Michael Cronin may be contacted at 978-675-2708, or mcronin@gloucestertimes.com.